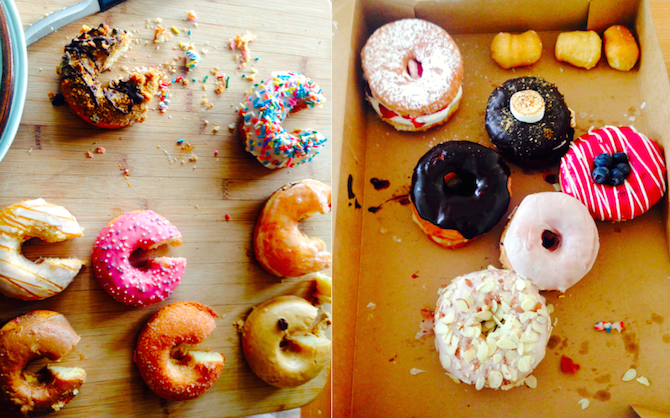 When Bear requested donuts for his 4th birthday celebration, I began a quest for the best vegan donuts in LA! After some research, I carried out a taste test between the donuts from Erin McKenna’s Bakery BabyCakes, Donut Friend, and Fonuts. The contestants included:

Hands down, Donut Friend kills it. Their plain glaze will bring you back to childhood. Extra bonus, they have donut holes!! If you are a sprinkles fan, you will be psyched on their sprinkles donut. They also have more gourmet-type or “signature compilation” donuts which are basically like full on desserts – from eclair style to strawberry short cake and a mini pb&j pie. And good news, all their donuts are vegan except 2! If I had to pick one of them, I would go with the Traditional Glazed. It was sure fun tasting all of them but just have to go with traditional. It’s the real deal!!

My second go to would be BabyCake’s Coffee Crunch. Especially if you like coffee, this one is super yum! And gluten free! Tied with Coffee Crunch would be Fonut’s Vanilla Latte. It’s a delicious blend of vanilla and coffee flavoring. Also gluten free!

For third place ranking, Donut’s Friend’s Custard Front Drive (basically like a chocolate eclair), Strawberry Lab, and Drive Like Jelly are all equal in my book. These were all insanely fun and messy, plus so decadently tasty!

Have you been to any of these places? Which are your favorites? Who makes the best vegan donuts in your hood?