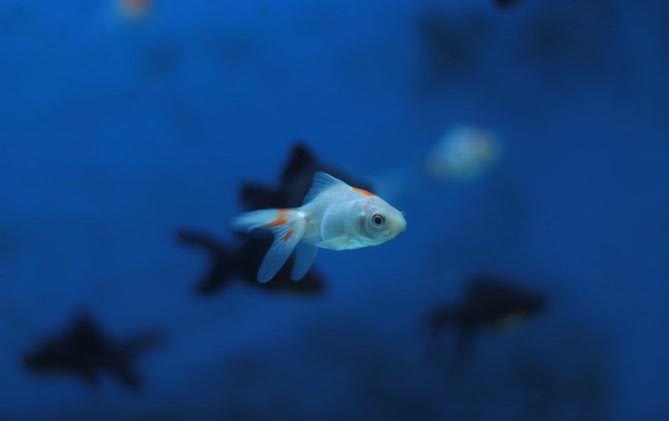 Home » The Case Against Eating Fish

Often times when people decide to stop eating meat, many continue to consume fish. What’s up with that? Why is it common practice to disassociate fish with the madness of the animal suffering? There are so many reasons fish are just as important to keep off our plates:

Fish contain mercury, other industrial toxins (organochlorines, polychlorinated biphenyls aka PCBs), and plastic. Coal-burning power plants release mercury into the air, which falls into the ocean. Bacteria consume this mercury, which then is consumed by little fish and is concentrated up the fishy food chain. Smaller fish and seafood like salmon, cod, shrimp, and trout have lower levels of mercury, while swordfish, tile, mackerel, and tuna have the highest. But they all contain mercury, which has been shown to damage the brain, kidneys, and lungs – and is particularly dangerous to pregnant women and their growing babies. The same cycle occurs for industrial toxins and plastics, they become a snack-size particle for little plankton eating fish to consume, and make it’s way up the food chain until it hits our bellies. Organochlorines, polychlorinated biphenyls (PCBs), and other environmental toxins that are known to be major offenders in fertility, increasing the risk of endometriosis and altering hormonal function.

So are farm-raised fish any better? Well, besides the fact that they are pumped full of antibiotics, farmed salmon were found to contain levels of industrial toxins called PCBs 16 times higher than their wild counterparts, so neither choice can be considered clean!

What about omega-3’s?  Omega-3 fatty acids (found in some fish) are good at lowering the risk of heart disease, improving blood vessel function, and improving the overall health of people with diabetes, but we can also get these health benefits from omega-3-rich sources like walnuts, chia, hemp, and flaxseeds, without any of the fishy stuff.

Once thought to be an inexhaustible source of food, the ocean today is overfished. As a result of commercial fishing, 90 percent of large fish populations have been exterminated in the past 50 years. Because there are fewer fish, we’re having to go deeper and deeper into the ocean to find them, and we’re displacing all sorts of marine creatures and plants that are essential members of the food chain in the process. It’s easier to ignore the reality of fishing since the ocean is so vast (70% of the planet!) but truthfully, industrial fishing is madness. Large commercial trawlers aimlessly scrape and haul up everything from the ocean floor, no matter if it’s their targeted species or not. Scientists say that the destruction caused by bottom-trawling is similar to that caused by clear-cutting old forests, only on a far greater scale. Roughly one-third of what is dragged in is not profitable fish, but other sea animals, including turtles, whales, dolphins, seals, and seabirds. These beings are referred to “by-catch” by the fishing industry. Severely traumatized and wounded, these “by-catch” animals are subsequently thrown back into the ocean, dead or dying.

If this makes your brain lean towards fish farming, it takes 2-5 pounds of small wild fish to produce 1 pound of farmed salmon, which is totally unsustainable!

It’s not just the cows and pigs that suffer, farm-raised fish are kept in cages with 40,000 other fish, enjoying the equivalent of half a bathtub of water each. But really in order to acknowledge the cruelty behind fishing all you have to do is take a look at a fish coming out of the water and see it fight for it’s life to breathe.

If you think that fish brains are too small to feel pain, think again. Fish are super sensitive creatures with highly developed nervous systems. They feel pain! Here is a great example that vegan yogini Sharon Gannon gives to demonstrate fish sensitively: “If you were a fish and you were to touch a doorknob, you would be able to feel the presence of every person who had touched that doorknob during the course of a day.”

Dr. Culum Brown, an Australian behavioral ecologist, has conducted experiments with rainbow fish and found that they have longer memories than we assumed (months as opposed to seconds), the capacity to learn, and that they transmit their knowledge to other members of their school. Another Australian study found that when fish are chased, confined, or otherwise threatened, they react as humans do to stress: with increased heart and breathing rates and a burst of adrenalin. Like any other animal, fish feel pain and have a will to survive.

So next time a fish looks at you from inside a tank at a Chinese restaurant, read his lips; he’s probably yelling, “Get me out of here!”